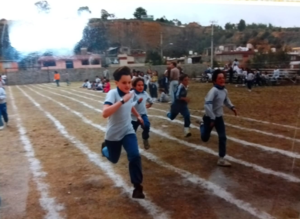 In the mid 90's, the Peterson Schools held a sport event called "Mini-Olympics" where students from all the campuses competed in different sport activities such as 100-meter dash, relay race, soccer, among others, in order to promote sports and fellowship in school.

Teamwork in sports has always been part of the Peterson Community culture. Some of you might remember participating in athletic activities, playing soccer on another campus or in a sports club. When I was in elementary school in Peterson Schools Pedregal, I remember taking part in the relay race, the 100-meter dash, obstacle course racing, which included jumping through colored rims and other challenging activities. These were called the Peterson Mini-Olympic Games. Honestly, I was eagerly waiting for this competition to come and I wanted to give it my best shot.


The other day, I was looking at some old pictures and started wondering how it all started and why we stopped holding the Mini-Olympic Games. Therefore, I found myself inquiring into it.


At the beginning of 1990, when the School turned 25 years old, they/the Peterson Board wanted to throw a great event and part of the plan was celebrating with all the Peterson Community. So, what better way to involve the community in this wonderful celebration than holding a sports event? As a result, the very first Peterson Mini-Olympic Games were held in Toluca at a local club. Afterwards, all the community was highly excited that the Peterson Board made it a tradition and each year all students wished to take part in the competition.


The Games had everything, from athletic pennants to 1st, 2nd and 3rd place medals. In addition, they were held in different campuses just as the Olympic games (but every year instead of every four years). Cuajimalpa was the second to hold them as the campus was merely new and they wanted to show the community that it was not that far away. The same happened when Tlalpan was the chosen venue to celebrate the Games..


As time went by, not only an increasing number of students began to compete but also Parents started to get interested in participating with their children. Also, the basketball team and the volleyball team were finally formed. I guess soccer was the big favorite since all campuses had a team.


Sadly, the last Games were celebrated around the end of the 1900s and the beginning of the 2000’s, since mobility in the city was becoming more difficult year by year. Saying goodbye to the Games had to be an unforgettable experience for everyone involved, so the organizers spared no expense this time and rented Villa Olímpica in the south of the city, transporting all athletes from all campuses to the competition venue by bus.


I bet that the alumni who had the opportunity to live such an amazing experience have many wonderful memories of it. Well, who knows? Perhaps we will be able to reignite this cherished tradition at some point in the future. I would surely be glad to go back and race my former school mates once again. I guess only time will tell.